I am writing to alert you to deeply troubling developments in the heart of the European Union, in Hungary.
It is urgent that you help spread the news about what is happening. Last week the Fidesz-led government launched a nationwide billboard and television advertising campaign reminiscent of Europe’s darkest hours.

The campaign uses an image of a grinning George Soros with the slogan “Let’s not allow Soros to have the last laugh!”
Thousands of these posters have been plastered around the country:  on billboards, on the metro, on the floors of Budapest’s trams so that people enter the tram without trampling on Soros’s face.

Understanding the government’s intent, some of the posters have been defaced with hateful graffiti such as “stinking Jew” scrawled across Soros’s face.  The government has spent $12.9 million (5.7 billion HUF) on the campaign so far.
Because of its clearly anti-Semitic overtones, the campaign has created an outcry amongst Hungary’s Jews and others. The leader of the Federation of the Hungarian Jewish Communities has called for an immediate removal of the poster as has Israel’s ambassador in Budapest.

Fidesz rejects charges that the campaign is anti-Semitic in nature and claims that the Hungarian government’s goal is to stop Soros’s “migrant campaign”, which they claim is promoting the immigration of a million illegal immigrants into Europe. The government has consistently and willfully misrepresented Soros’s views on migration and refugees.

As a survivor of the Holocaust who hid from the Nazis in Budapest and later was himself a refugee, Soros knows first-hand what it means to be in mortal peril. He carries the memory of the international community’s rejection of Jewish refugees fleeing the Nazi.  It is from the crucible of those experiences that his empathy for refugees from war-torn Syria and elsewhere was born.

Soros’s actual position on migration is that the international community should provide more support to the developing countries that today host 89% of refugees and that Europe should accept several hundred thousand fully screened refugees through an orderly process of vetting and resettlement. He believes that qualified asylum seekers should not have to risk their lives crossing the Mediterranean to reach safety.

He also believes that Europe needs a common asylum system that equitably shares responsibility for protecting legitimate refugees, rather than placing that burden on only a few countries. Soros’s position is entirely consistent with mainstream European values. The Hungarian regime’s xenophobia and demonization of refugees are anti-European. The claim that Soros is promoting a scheme to import a million illegal immigrants into Europe is Victor Orban’s fantasy.

Please help us spread the word about this anti-Semitic and anti-refugee campaign in the heart of Europe.

I have included sample images of the Fidesz poster campaign. I have also provided links to recent news stories that attempt to explain why George has inspired the wrath of authoritarian rulers around the world. 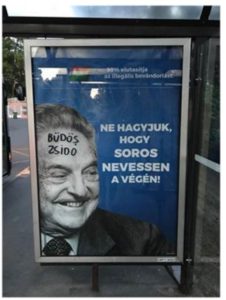 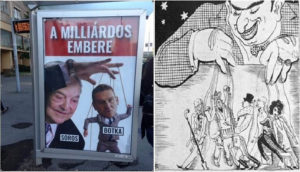 The first picture is from another Budapest bus stop, part of a separate campaign by Fidelitas, the youth wing of the governing Fidesz party. It depicts George Soros as a puppet-master controlling László Botka, the Socialist nominee for Prime Minister. Compare it with the second image of a cartoon from a Hungarian anti-Semitic publication in the 1930s.